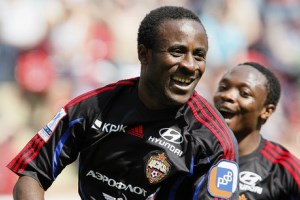 Izvestia reported that both Premier League clubs have been following the 25 year old for much of the calendar year and are ready to bid for the striker in January.

CSKA rate the Ivory Coast international at £18 million, which could prove too rich for either English outfit.

Former CKSA star Rolan Gusev said: “Of course, a player like Doumbia, could not fail to attract attention in Europe.