It has been revealed that Everton ARE prepared to sell John Stones to Chelsea this summer. 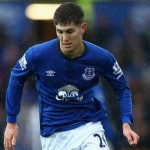 The Mirror says Chelsea will return with a fresh bid for Stones after Everton rejected their second offer of £26million.

The champions, who had a £20m move turned down two weeks ago, returned with a fresh offer on Tuesday.

The Toffees are holding out for around £34m – a British record fee for a defender.