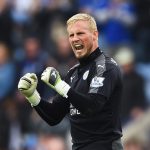 Reports have emerged claiming that Everton are making a move for Leicester City goalkeeper Kasper Schmeichel.

The Daily Mail says Everton are exploring the possibility of signing Schmeichel from Leicester City.

Wayne Hennessey of Crystal Palace, Asmir Begovic at Chelsea, Ajax’s Jasper Cillessen and Newcastle’s Tim Krul have all been discussed as they look to bring in a keeper of presence and re-inforce a defence that conceded 55 goals last season.