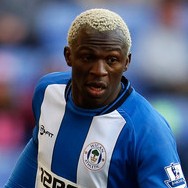 Everton have signed Wigan striker Arouna Kone on a three-year deal after meeting a £6m release clause.
Newcastle and Everton both met the clause in the 29-year-old’s Wigan contract but the Ivorian has opted to move to Merseyside

He will link up again with manager Roberto Martinez, who left Wigan at the end of the season.
Kone scored 11 Premier League goals for last season’s FA Cup winners who were relegated to the Championship.

Kone said: “Every player dreams of playing for a bigger club and coming here is a big step up for me.

“I hope to be able to fulfil all my dreams and get as far as I can through hard work.
“I hope to score as many goals as I can next season.”

Wigan boss Owen Coyle said last week he expected Kone to leave the club and that Everton was his preference.
Martinez, who took over at Everton last month, signed Kone on a three-year deal from Spanish side Levante last summer.

“For me it’s an honour to be back working with the manager once again. Last season he really helped me a lot,” added the player.

Kone has also played for Belgians Lierse SK, Dutch sides Roda JC and PSV and Sevilla in Spain.
He has played his part in three African Cup of Nations campaigns and was also selected for the World Cup in Germany in 2006.

The fee was officially announced as undisclosed.