Reports are out claiming that Barcelona winger Gerard Deulofeu is considering his future in Spain. 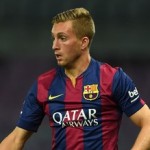 Deulofeu, having been shunted away on-loan to Sevilla this season, has managed just 17 minutes of first team football in four games this season.

Criticised by Barca coach Luis Enrique in preseason for his lack of defensive application, Deulofeu fears he has little future at his parent club and is now assessing his options.

Everton boss Roberto Martinez is aware of Deulofeu’s frustration and would welcome the chance to sign the Spain U21 star permanently in 2015 – whether that’s in the summer or as early as January.

It is also said that Stoke City boss Mark Hughes has also been contacted by intermediaries about Deulofeu’s situation and has asked to be kept up-to-speed on developments.