Reports are out claiming that Everton striker Romelu Lukaku says he has no intention of resting on his laurels despite joining an elite group after scoring a brace in the Toffees 4-0 win over Aston Villa on Saturday. 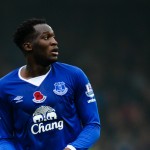 The Belgium international striker joined Robbie Fowler, Michael Owen, Wayne Rooney and Cristiano Ronaldo as the only players to have notched 50 Premier League goals before their 23rd birthday.

“Sometimes it is nice to be in the history books,” Lukaku said.

“I’m very privileged to play in this league but I want to keep the record going. I need to keep improving. We want to play European football so we need to keep going.”

Belgium international Lukaku has scored nine goals for the seventh-placed Toffees so far this season.