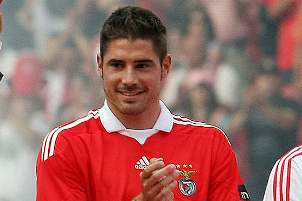 Interesting news are out and it has been reported that Premier League club Everton have emerged as the frontrunner in the chase for Benfica’s Javier Garcia.

The Spanish defensive midfielder was impressive when his Portuguese club took on the Toffees in two Europa League fixtures recently and manager David Moyes is believed to be keen to bring the player to Goodison Park.

However it seems that Everton will face some competition for the 22-year old as Chelsea is also on the market for a holding midfielder to replace Michael Essien when he goes on duty with Ghana for the African Cup of Nations.

The Blues had their transfer ban suspended last week so are now free to deal this January but they, along with Everton, will have to pay in the region of £13milion of they want their man.

Garcia’s father, who is also his agent, confirmed that any interest in his son was merely speculation at this early stage.

His father added that the player is very happy at Benfica.

He also added that the player knows that Everton is phenomenal club and he is not thinking about leaving at the moment.

The player’s father also said that the both of them have not even talked about these rumours.