It has been reported that Everton are eyeing young Barcelona striker Munir El Haddadi. 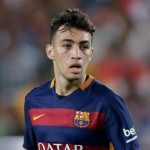 The highly-rated 20-year-old had attracted interest from Arsenal and Chelsea in the summer but the Catalan giants rejected a move.

Munir is keen for a move away from the Nou Camp and wants the chance to work under Martinez.

Everton already acquired Gerard Deulofeu from Barcelona on loan before signing the winger in the summer.