Reports are out claiming that Everton are closing on a deal for free agent Samuel Eto’o. 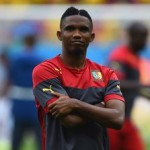 The Times reported that Everton chiefs met with his representatives over the weekend.

The Cameroon international striker was released by Chelsea at the end of last season.

Everton are now preparing to make a contract offer to Eto’o for consideration.

The 33 year-old forward has also held talks with Liverpool, Arsenal and Tottenham in recent weeks.