Reports are out claiming that Everton are ready to hand John Stones a bumper new deal. 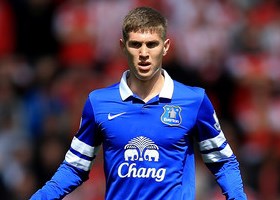 The People reported that Everton want to give the England U21 international defender a major new deal to keep him from being tempted by Arsenal, Chelsea or Manchester United.

It is said that the Goodison club want to reward him with a big deal – but it is proving ­difficult because he is in a ­dispute between agents.

The 19-year-old Stones was taken to Everton by Yorkshire-based Star Management Signings, but now major firm WMG have stepped in for him.

Agent Paul Martin – one of the leading wheeler-dealers with WMG – is expected to be Stones’ new ­advisor when his old representation deal runs out. But as Stones is under contract to his present agent for a few months, a worrying delay is emerging.

Both agents will want a slice of a potentially huge new contract, so the dispute is clouding negotiations and signing for longer and more cash.