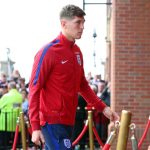 It has been revealed that Everton will do everything in their power to keep John Stones away from a bigger Premier League club.

The Daily Mirror suggests that the Toffees will refuse to sell the 22-year-old for a second summer running, after Chelsea showed significant interest last year.

Manchester City, Manchester United and the Londoners are on the trail of Stones and are all expected to make big-money bids for his services, but Everton have no intent to sell.

Stones is currently away with England at Euro2016 in France and during this time, the Goodison Park outfit will bat away any interest as they look to keep their prized assets on Merseyside as they get set to appoint Southampton’s Ronald Koeman as their new manager.