Reports are out claiming that Everton ace Gerard Deulofeu says they must be at their very best against Alexis Sanchez’s Arsenal. 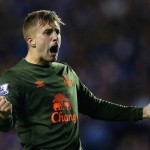 Deulofeu knows the Blues must be at their best regardless if they are to respond to defeat against Manchester United in their previous outing.

“Alexis is a top, top player,” he told evertonfc.com. “I had the chance to play against him in training when we were at Barcelona together.

“Hopefully he doesn’t score against us. He can score two if he likes, so long as Everton score three!

“Arsenal have always been impressive under Arsene Wenger. You can’t criticise their performance in the league – they are second.

“But we have to bounce back. We need to show a lot more fight and do what we can to win the game.”