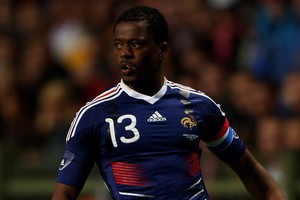 Manchester United fullback Patrice Evra has admitted that he is proud to be France’s World Cup captain.

Evra was chosen ahead of Arsenal veteran William Gallas.

“I feel pride and honour and a huge responsibility but I have my team-mates behind me,” he said. “We are very proud as a team and confident. We have a great deal of responsibility on our shoulders.”

The full-back struggled at United in the second half of the 2005/06 season having arrived from Monaco in the January transfer window. However, since then he has blossomed into perhaps the finest left-back in the world and that progression has culminated in him captaining his country.

Evra added: “It’s difficult to talk about oneself. I’ve put in some hard work to get to this point – I haven’t had any gifts given to me. I am determined.

“My first six months in Manchester were difficult but I believed in myself and my abilities and I think that is what makes a difference. I think my psychology helped me build and develop my career.”