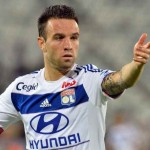 Reports are out claiming that the former agent of Lyon midfielder Mathieu Valbuena has revealed contact with Arsenal.

Valbuena was passed over by Arsenal boss Arsene Wenger when offered the chance to sign him.

“I met Wenger and (Andoni) Zubizarretta, while he was Barcelona sporting director. They told me the same thing: Mathieu is a good player in Ligue 1. Not C1,” the former agent of Valbuena, Christophe Hutteau, told France Football.

He added: “When I expressed my skepticism about the real chance of him joining a great club, he (Valbuena) replied in an ironic tone ,’We’ll see …’.”