Reports are out claiming that Giovanni van Bronckhorst has been confirmed as the next Feyenoord manager. 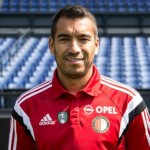 ?The former Arsenal, Barcelona and Rangers full-back will step up from his role as assistant at the Dutch club to replace Fred Rutten in the top job this summer.

?Van Bronckhorst, who started and ended his playing career at De Kuip, has been in coaching role with the Rotterdam outfit since 2011 but will now get the chance to take full control.

?”[The appointment] fills me with pride and I am extremely grateful for the confidence that Feyenoord has placed in me,” he told the club’s official website.

?”As an assistant coach, I learned a lot from both Ronald Koeman and Fred Rutten.”?

Mikel Arteta Defends Santi Cazorla : He Does Not Dive!