Reports are out claiming that Lassana Diarra has been praised by France manager Didier Deschamps. 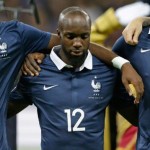 The Marseille midfielder lost his cousin Asta Diakite in the Paris terror attacks on Friday but still travelled with the French squad for Tuesday night’s friendly with England.

Former Chelsea, Arsenal and Portsmouth man Diarra received a standing ovation when he came on in the second half of the eventual 2-0 defeat and his character and strength was then exalted by Deschamps after the match.

“I spoke at some length with Lassana and he said all along he would be more than ready to come on and feature if I needed him,” he said.

“I really respected his choice of how he handled himself and carried himself throughout this difficult period, and his presence has been important for us.

“For that reason alone I made the decision that for the last 20 minutes he was going to feature. Because of how he has been with us it was deserved.”