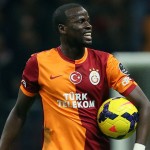 Reports are out claiming that Emmanuel Eboue will learn next week if his trials with Sunderland have been successful.

Sunderland will decide whether to offer former Arsenal defender Emmanuel Eboue a short-term contract next week.

According to the Sunderland Echo, Eboue has completed a “mini pre-season” with the Black Cats’ fitness coaches.

He is currently a free agent after being released by Galatasaray last summer.