Reports are out claiming that Roma winger Gervinho is set for a Premier League return this week. 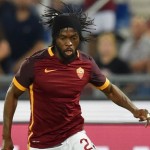 RAI reports Roma chief Walter Sabatini is in London today to negotiate the sale of Gervinho.

The former Arsenal winger is on the outer of Roma coach Rudi Garcia’s plans this season.

No clubs have been identified as potential destinations for Gervinho, though West Ham and Crystal Palace will be sounded out.

Along with Gervinho, Sabatini could also be seeking a new club for Ashley Cole, who has been told he has no place in Garcia’s team. Wenger Declares Arsenal Can Win The Premier League This Season