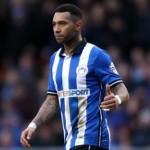 Reports have emerged claiming that Jermaine Pennant admits he is loving his time back in his homeland of England.

The 32-year old winger returned to the UK when he signed a short-term deal with Wigan Athletic in January after last playing in Britain for Stoke City at the end of 2013.

Pennant’s career started brightly when he joined Arsenal back in 1999 but he has been unable to settle anywhere for a lengthy period of time ever since.

Spells with such clubs as Watford, Leeds United, Birmingham City, Liverpool, Real Zaragoza, Wolves and FC Pune City – surrounded by some off-field misdemeanours – have followed but now Pennant is looking ahead after rediscovering some decent form with the Latics.

“It’s great to be playing back in England,” said Pennant in the Daily Mirror. “It’s true what people say about not realising how much you love something until it’s gone.

“After I left Stoke last January, I quickly realised that it wasn’t my football ability that was in question but my character.

“I just can’t understand where that’s come from, and I hope that my time at Wigan has shown that I’m just a normal lad whose made some ‘off-field’ mistakes.”