Reports are out claiming that Lazio are interested in Tottenham striker Emmanuel Adebayor. 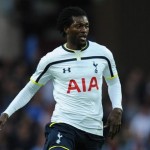 According to II Messaggero, Lazio chiefs are in the market for a new centre-forward signing and are seriously considering Adebayor.

Igli Tare, Lazio’s football chief, has made contact with Spurs about a deal for Adebayor. He has also asked Liverpool for Fabio Borini.

The former Arsenal and Manchester City star held talks with Aston Villa earlier this month before eventually turning down the move.

Any deal for Lazio is dependent on the Rome club overcoming Bayer Leverkusen in their Champions League qualifier.