It has been reported that Mikael Silvestre has ruled himself out of Chennaiyin FC’s opening Hero Indian Super League match. 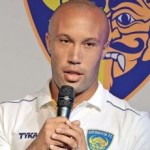 The Mahendra Singh Dhoni-owned and Marco Materazzi-coached Chennai outfit take on FC Goa in Fatorda on Wednesday but the game has come around too quickly for former Manchester United, Arsenal and France defender Silvestre.

“But I have had good sessions with the boys so I will try to perform to my best if I get the chance to play.”

Of the inaugural ISL season, Silvestre added: “There was a lot of excitement among the players, especially in the first game when there were a lot of physical challenges.

“In the first game the artificial pitch made it difficult but the second match had a great flow and good atmosphere.”

Silvestre, who has previously played for Rennes, Inter Milan and Werder Bremen, most recently played in North America’s MLS with Portland Timbers prior to his January release.