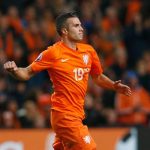 Reports are out claiming that former Manchester United and Arsenal captain Robin van Persie could be on the move to Italy.

Lazio have made a 10 million euros offer to sign Fenerbache striker Van Persie, according to reports in Turkey.

Van Persie is open to a move to Italy after having an inconsistent period with the Turkish giants.