Reports are out claiming that Shanghai Shenhua have launched a bid for Fenerbahce striker Robin van Persie. 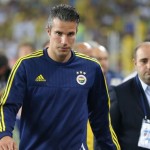 Algemeen Dagblad reported that a deal could be on, with the Chinese Super League club offering €25 million for the Dutchman.

The former Arsenal captain is said to be unsettled in Istanbul and Fener are willing to sell.

Van Persie would move to Shanghai Shenhua as a replacement for Tim Cahill, who was released this week.