It has been reported that former Arsenal and Manchester United striker Robin van Persie is desperate to score his first home goal for Fenerbahce. 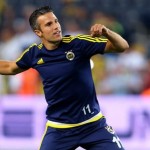 Van Persie has struck twice for Fener so far this season – but both goals were scored away from home.

“It was one of the first things I thought of when I was first in the stadium. To score a goal for the home crowd,” said Van Persie.

“Unfortunately, I’ve still not managed it.

“Hopefully I can do it, so to thank the Fenerbahce fans, our 12th man.”