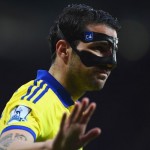 Reports are out claiming that Chelsea midfielder Cesc Fabregas rates the Spanish Liga ahead of the Premier League.

The former Arsenal star conclude that the quality of football in Spain is superior to anywhere else, but the 28-year-old says the Premier League is stronger in other areas.

“La Liga and the Premier League are different,” he told Spanish radio network Cope. “The Spanish league is more technical but the Premier has changed a lot since I left – it has improved a lot, tactically.

“The teams below know best how to compete with the big ones. Beating them is more complicated. The Premier League is more competitive but, in Spain, there is more quality.

“Winning the Premier League title was really exciting. I played here for many years without winning it and wishing I could. It was a thorn in my side. Now we have won it and can fight for the Champions League.”