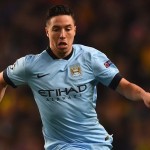 Reports have emerged claiming that Samir Nasri could be offered to Juventus as part of a proposed deal to land Paul Pogba.

The Mirror reports that Manchester City are contemplating using the French midfielder as a makeweight in order to lure compatriot Pogba to the Etihad Stadium this summer.

Nasri reacted angrily when he was dropped in early March which is believed to have brought about some ire from manager Manuel Pellegrini who is ready to offload the former Arsenal playmaker.

It is believed that Nasri has been added alongside striker Edin Dzeko in City’s planned offer to try and nab 22-year old Bianconeri ace Pogba in the next transfer window.