Samir Nasri has revealed that his Manchester City future is in the balance. 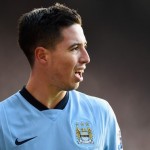 The 27 year old insisted Manuel Pellegrini’s side are better than Roma and should beat the Italians on Wednesday night to reach the Champions League knockout stages.

But the ex-France star told beIN Sports his future is unclear.

“I do not know if I will leave the club,” said Nasri, who joined from Arsenal for £25m in 2011 – and signed a new five-year contract this summer.

“If they come to me and they tell me to pack my bags, I will leave.” Arsenal Pushing To Complete The Signing Of Kostas Manolas

Andrey Arshavin Determined To Fight For His Place In Arsenal