Reports are out claiming that Chelsea midfielder Cesc Fabregas won’t rule out a future move to Real Madrid. 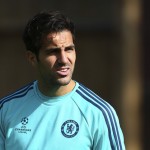 The former Arsenal captain was asked if he could see himself playing for Real in the future.

The former Barcelona player told COPE: “I do not know, but I feel very identified with the profile of (Toni) Kroos’ game, James (Rodriguez) and (Luka) Modric.

“But these are things you do not have to ask me.”

Cesc is in his second season with Chelsea, having moved from Barca. My Style Made For Premier League – Chelsea’s Juan Cuadrado