It has been reported that former Arsenal midfielder Andrey Arshavin is risking arrest as his family split becomes messy. 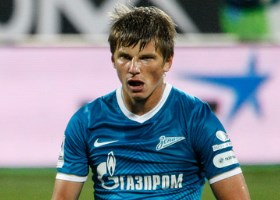 Now with Zenit St Petersburg, Arshavin, reports Izvestia, has failed to meet all his agreed obligations to his former partner and children.

In London, the Russian international midfielder agreed to financial obligations to his three children and their mother, which, in addition to monthly alimony, was a lump sum to meet the needs of children. Furthermore, Yulia Baranovska was to be given a two-bedroom apartment in St. Petersburg, and a car.

It’s claimed by Baranovska’s lawyer that the property in Russia has not been granted and the alimony being paid is falling short of it’s agreed value.

The situation has led to the London courts which could see Arshavin arrested should he leave Russia for co-operating country in the EU.

But Baranovska’s lawyer insists this is something she does not want to see happen and also doesn’t want to damage Arshavin’s playing career.