It has been reported that former Arsenal star Andrey Arshavin admits he could hang up the boots at the end of the season. 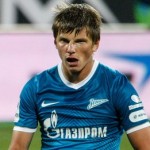 The ex-Russia captain is currently on the books at Zenit St Petersburg, but has struggled for minutes this term.

With his Zenit deal winding down, Arshavin, 33, admits he may now retire: “Maybe I’ll stop.

“A farewell match? That does not work for me. Only if the proceeds going to charity.” Per Mertesacker Desperate For Arsenal To Maintain Current Form