It has been reported that Sunderland are eyeing Galatasaray midfielder Emmanuel Eboue. 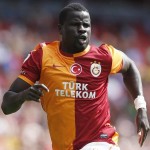 The former Arsenal utility is keen on a return to England.

The Journal says Sunderland boss Gus Poyet said earlier this month that striker Jermain Defoe would probably be the club’s one and only signing of the winter transfer window.

But Eboue is a free agent having been released by Galatasaray, and is thought to be keen on a return to the Premier League.