It has been reported that former Arsenal star Paul Merson has questioned Liverpool’s appointment of Jurgen Klopp. 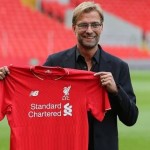 Merson wrote in the Daily Star: “Liverpool are taking a massive gamble by appointing Jurgen Klopp and making him work with the Invisible Men.

“I think they were out of order sacking Brendan Rodgers the way they did, and please don’t tell me they hadn’t already spoken to Klopp because I know how football works.

“I like Klopp but he’s a big gamble. He plays a certain way, with a high press at 100 miles an hour. Do Liverpool have the players to do that? I’m not sure.

“We’ve seen it with Mauricio Pochettio. He had the players to do that with Southampton but he went to Tottenham and it took him time.

“He didn’t have the players he needed to play that way.

“The problem is I don’t know how much time Klopp is going to get at Liverpool, he’s got to get them in the top four this season.”