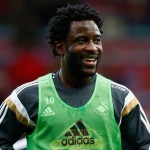 The former Swansea City striker signed for the champions in a £30 million deal yesterday.

Smith wrote in the Telegraph: “Proven in the Premier League with a very good goals-to-games ratio, Bony should not need much time to settle in his new environment.

“At 26, he is experienced enough now, both for club and country, to take this challenge on without too many problems. As shown at Swansea, he understands the demands of playing up front on his own, so allowing him to slip into a City system not too dissimilar from the one in South Wales.

“That is going to come in handy, especially with Sergio Aguero recovering from injury. No reason why Bony, once he returns from the Africa Cup of Nations with the Ivory Coast, cannot smoothly combine with David Silva, Samir Nasri and Yaya Toure.”