It has been reported that ex-Arsenal striker Kevin Campbell feels Alexis Sanchez isn’t the natural goalscorer his old club needs. 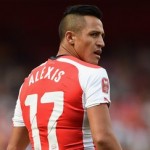 But Campbell told talkSPORT: “Alexis Sanchez is a fantastic signing but I don’t think the problems have really been addressed.

“I like the Calum Chambers signing but he’s going to take a bit of time to bed in. The two main problems were the centre of the pitch and a noted goalscorer and they haven’t addressed that problem.

“If you struggled against the top boys and you don’t address the problems, then you can’t expect a different result in my opinion.”