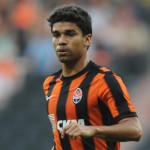 Reports are out claiming that Stoke City and West Ham United are interested in Shakhtar Donetsk striker Eduardo.

The Croatia international is currently on the books of Shakhtar Donetsk but he has long been rumoured to be on his way out of Ukraine, to either Italy or the Premier League.

The 31-year-old is now coming to the end of his four-year contract with the club after joining from Arsenal in 2010.

Man Utd Locked In Talks With Southampton For Luke Shaw