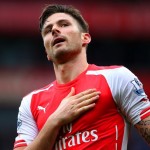 Nicholas says he’d rather have the Frenchman up top in a lone-striking role in a combination side featuring Arsenal and Chelsea stars.

“Up front, on his own, I’d have Olivier Giroud over Diego Costa,” he said.

“Look at Giroud’s stats, he’s been sensational when he’s been fit this season.

“He’s turning into the perfect Premier League striker with his power, touch, heading ability and confidence – he’s really moved up a level this year.”