Francis Jeffers does not blame Arsenal boss Arsene Wenger for the collapse of his career. 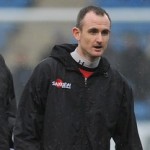 The former Everton and Gunners striker is now looking back on a career which had so much promise.

He told the Daily Express: “Staying at Everton would have been the best place for me. I would have had a lot more football. I went to Arsenal and it didn’t quite happen.

“Then there was the frustration of not playing regularly and not being able to play as well as I knew I could. That was a big part of it.

“The lack of football and injuries, for me, is a recipe for disaster. You need a manager who will give you 15-20 games which I thought I would get at Charlton under Alan Curbishley, but it didn’t happen for one reason or another.

“I probably didn’t live my life right around those times and it is important when you are injured and not playing as much.

“I was out, partying, living life, not training. Tossing it off in training because I always thought I wouldn’t play on Saturday anyway and now I look back with a lot of regrets.

“That is where I should have been putting it in more. That was at both Arsenal and Charlton.

“When your playing career is finished, like it is for me now, you start to look back. The experience I have and sitting back makes me realise about it.”