Reports are out claiming that Matthew Upson has joined MK Dons on a one-year deal. 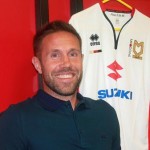 The 36-year-old defender has completed a free transfer to the Championship club following his release from Leicester City earlier this summer.

Former England international Upson, who has previously played with such clubs as Arsenal, West Ham United, Birmingham City and Brighton & Hove Albion, was thrilled to be joining the Milton Keynes club on the eve of the new season.

“I’m very pleased to be here and I’m excited about the new challenge,” Upson told the club’s official website.

“This is a club that has grown in stature and I see it as an exciting place to be. Me and the gaffer (Karl Robinson) have been chatting a lot about the style of football the team play and it’s something I feel I’ll fit into well.

“The experience I bring with me is something I’d like to think can help too.”

Birmingham Secure Arsenal’s Jon Toral On Loan For Next Season