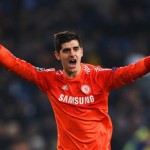 Ujfalusi played with both keepers with Atleti, while he is also a Czech Republic teammate of Arsenal signing Petr Cech.

“I have to say De Gea [is superior to Cech and Courtois],” Ujfalusi told the Daily Mail.

“I was working with him for more than two years, and he was playing really well.

“It’s difficult to say, but Petr Cech is 10 years older than De Gea and Courtois.

“The beginning in Manchester United wasn’t so easy for him, but I think now he’ s back in his old form and playing very well.” Pedro Delighted To Be Playing For Chelsea Boss Jose Mourinho