It has been reported that Former France manager Raymond Domenech has urged Southampton star Morgan Schneiderlin to join Manchester United. 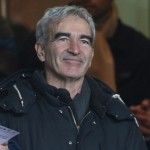 The French international midfielder is reportedly interested in a move to Old Trafford but the Saints are holding out for a transfer fee of £30million according to some reports.

Despite this, Domenech believes heading to United would be the right move for Schneiderlin who has been at St Mary’s since 2008.

“For him, (Manchester United) is a good move,” Domenech said.

“If he wants to be with the French national team, then he has to be in this Champions League.

“But if he stays at Southampton no luck.”

“United are better than Southampton, sure, but it’s not City, it’s not Chelsea. For him, the first thing is to leave Southampton.

“After, if he gets a team just behind the three big teams, it’s good. Maybe after, he’ll come through. He is good enough for the Champions League.”

Schneiderlin is also linked with a move to Arsenal.