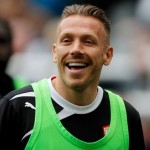 Reports are out claiming that former Newcastle United and Liverpool star Craig Bellamy has explained turning down Manchester United.

The Welshman admits concern over a knee injury forced him to reject the approach.

“Fergie met with my agent in 2002 and said: ‘Can you get him out of Newcastle?'” he revealed to the Daily Mail.

“The honest truth is my knee. I had just had an operation. I knew that if I went to Man United I would have to hit the ground running and with my knee that would have been impossible.

“I did think that maybe I should just go and deal with it then. Just get there… but I would have got caught out at United and that would have been terrible.

“I have to live with myself and sometimes that hasn’t been easy. But I had to be honest with myself so I was.”