It has been reported that former Inter Milan and Manchester City boss Roberto Mancini is in contact with Barcelona. 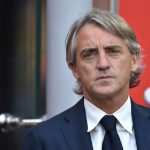 The Italian is a free agent and it’s been revealed he’s on the radar of Barca.

The Blaugrana have launched a new coaching search after Luis Enrique’s announcement that he will step down at the end of this season.

And Barca are in talks with Mancini.

A French source revealed: “The contact was established. There are discussions.”

Carles Puyol To Quit Barcelona In The Summer

Gerard Pique : I Am Happy With Shakira!