It has been reported that former Manchester United assistant manager Mike Phelan is upset over the sale of Danny Welbeck to Arsenal. 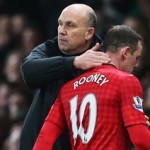 The England striker, 23, came through United’s famed youth system but joined the Gunners for £16m on deadline day.

United brought striker Radamel Falcao on a £6m loan deal from Monaco, their sixth signing of the transfer window.

“They have probably lost the way of Manchester United a little bit,” Phelan told BBC Sport.

“Now, rather than produce, it may be the case where they are buying in.”

He added: “Someone like a Danny Welbeck has been part of United’s identity and that has been broken.

“What will happen in the future now, nobody knows but that thread has been broken now.”