It has been reported that sacked Real Sociedad boss David Moyes is wanted at Leeds United. 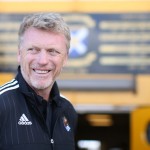 The Mirror says Moyes is the man Steve Parkin wants at Leeds once his £30million takeover goes through.

Parkin is negotiating a buyout at Elland Road with majority owner Massimo Cellino and has identified Moyes as the manager for his new regime.

Moyes is looking for a job back in England after being sacked by Real Sociedad and Leeds are not far from his Preston home.

Parkin admires the former Everton and Manchester United boss and feels he is who he wants long term to lead Leeds back into the Premier League after an 11-year absence.