It has been reported that Nemanja Vidic is set to leave Inter Milan after just one season. 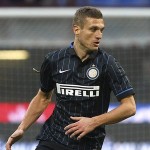 The former Manchester United captain has been told he can leave Inter this summer.

Sportmediaset says Vidic has rejected an offer from VfL Wolfsburg this week.

The veteran has his eye on a bumper final pay-day and is waiting for offers from the Middle East and MLS.

Vidic has also been linked with a return to England, where Everton and Liverpool are keen.

Wayne Rooney Desperate To Shine At The World Cup