Reports are out claiming that former Manchester United defender Paul McGrath has questioned their deal for Bastian Schweinsteiger. 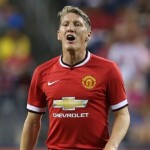 McGrath wrote in the Sunday World: “I wonder did Bayern Munich see former manager Louis van Gaal coming when they arranged the Schweinsteiger deal? United paid £15m for the 30-year-old German but 10 days later Bayern used some of that money, and more, to sign the excellent Arturo Vidal, the top-notch Chilean star, from Juventus.

“Why didn’t United cut out the middleman and get Vidal, who is 28 and the sort of commanding and influential midfield player the club has not had, dare I say it, since Roy Keane departed.

“Schweinsteiger is in the Keane mould too, he’ll demand the ball, he will dictate play, he will marshall the troops.

“The one issue is will the midfielder be fit enough to do himself justice?

“The lad has missed a lot of football in the last two years, even in the months coming up to Germany’s World Cup triumph of 2014.

“A fully-fit Schweinsteiger could certainly turn United into challengers, but if I was on the Stretford End I’d be wondering why my club didn’t get Vidal instead.”