It has been reported that released Manchester United defender Rio Ferdinand has agreed a contract with QPR. 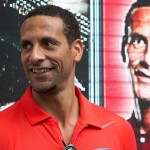 The Daily Mail reported that the 35-year-old has been persuaded to take a massive drop in wages after hearing Harry Redknapp’s plans for how he can help the London club on their return to the Premier League.

It is believed his salary is less than a third of his £200,000-a-week salary at Manchester United.

The former England international has also turned down a lucrative media career, with both BT and the BBC keen to land him.

“He just wants to play,” said a friend.

Ferdinand is expected to return to London to complete the transfer soon.