Reports are out claiming that former Manchester United and Everton midfielder Phil Neville blasted the showboating of Tomas Rosicky during Arsenal’s FA Cup win at Brighton. 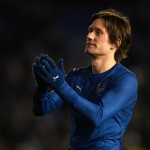 Neville caused uproar when he flippantly claimed he would have ‘two-footed’ him for some of his antics.

Speaking on BBC One, Neville said: “If that was a training session and somebody did that I’d be first over there and I’d probably look to two-foot him or take him out of the game.

“If somebody did that in training to me, winding me up, I would be straight in there. I’d smash them.”