It has been reported that former Manchester United and Bolton Wanderers midfielder Chris Eagles has signed with Blackpool. 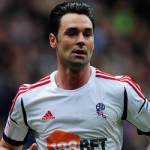 Eagles has signed a short-term deal with Championship strugglers Blackpool until 18 January.

The 29-year-old former Manchester United player had been training with the Seasiders following his release by Bolton in the summer.

“I’ve got to do what I love to do best, and that is to excite the crowd, score and create,” he told the club website.

“I’m chomping at the bit. I’ve obviously played against Blackpool before, the fans are brilliant with the drum at home, so I’ll be looking forward to that.”