It has been reported that former AS Monaco fullback Eric de Meco was impressed by Anthony Martial on his Manchester United debut. 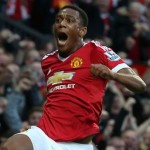 The France international striker scored in victory over Liverpool on Saturday.

“That’s what he did against Arsenal, Juventus and Valencia. He has the qualities to do much harm to British defences.”

De Meco continued, “At 20 metres from the goal, he will make space, for sure. Now when you look at the game against Liverpool, we see the enormous progress he will have.

“I wish him half the career of Thierry Henry!”